Reflections on the '70s 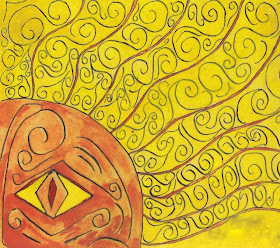 Sally Cavanary Baker sent me this in an email about the blog:

I think that there is a much older person in you somewhere because you made me remember the little things we used to do when I lived a hippy-like style in an Oregon cabin during the 1970's. No locked doors, everything shared, happiness in the homegrown and handmade. Pinned outside our front door would always be a scrap of paper with thoughtful words or a favorite quote.

First of all, thank you Sally for thinking I am younger than I am although I am beginning to think that I should make more rather than less of my age (60). Anything I have accomplished has been due to the work and reflection of many years. Rilke's line from Letters to a Young Poet, "Patience is all," is my guidepost.

Sally's message made me think fondly back to the '70s. While it is often described as the time of polyester and disco, for me it was the era of macrame, a grain grinder, and folk music— a kitchen with barn board walls, a radio tuned to WCAS in Cambridge which played folk music from dawn to dusk and was silent the rest of the time, and whole grain bread that was a jaw exercise as well as an eating experience (quite pleasant to the initiated and less so to those who were not).

It is also called the 'Me Decade" and it was for me in the sense that finding a direction for my life was a major absorption. In 1970 I was a college student at the first of the three schools I attended before graduation. As 1979 came to a close, I was a beginning calligrapher with a year of daily work into the craft and a love of letters, letterform, and the words they formed. In the meantime I had married (1974), had several jobs, embarked on several educational paths, and eventually picked up pen and ink. I had worked in an office, taught swimming for the Boston School Department, and taken courses in Teaching Certification with the goal of eventually becoming a special education teacher, Children's Literature, and Chemistry with the thought of becoming a nutritionist. In a strange way, I found that being married made me feel more pressure to figure out what I wanted to do with my life. One major question was settled—I had a life partner. Now for the most personal one—what would I actually do with my time on this earth.

Having grown up with traditional education viewed as being of prime importance, my first attempts at a life path after college involved further study in academic institutions. I also spent a lot of time making crafts. I took a pottery class where I struggled mightily with the wheel and ended up making some primitive hand-built pieces. I sewed some clothes but had more misses than hits. What looked dramatic and willowy in the pattern book looked preppy and bland on me. I painted designs on shirts, embroidered purses and shirt collars and army jackets and knapsacks, drilled holes in tin cans for candle holders, created cards for every holiday, and made macrame wall hangings and necklaces.

At some point I began to have an idea that I wanted to have a creative life. I remember thinking that I could approach it one of two ways. I could do the very '70s back-to-the-earth thing and learn how to make what we needed for our life—clothes, food, furniture, etc.—everything would be handmade although not necessarily of the highest quality or craftsmanship or I could find one thing and become really good at it and make it my calling. I ultimately chose the latter although I still enjoy making simple everyday things and brought lettering and then books into daily life as best as I could.

In some ways, I now feel like I am reconnecting with those earlier days. After many years of narrowing my focus, I am opening up again. While I was working hard to forge my path as an independent educator without the support of a school system or institution and establish myself as an artist, I had children in the house (with two kids six years apart, the child-raising part of my life was longer than those who have a small family closely spaced together). With the kids going or gone from the nest and the closing of the in-the-schools-phase of my teaching career, I now have more time for myself. I always thought I would dedicate that extra time to serious pursuit of my art. This would be the time for me to have a traditional art career with regular shows in galleries.

Now that I am here, this is no longer what I want. For one, I find that I work slowly and in fits and starts which does not make me a good candidate for commercial galleries. I'll leave my fundamental issues with art and commerce for a later post. In addition, I know now that the need to share that was my initial impulse for teaching is deep in my blood. I am taking some of this time to reach new audiences with community projects and adult and family workshops. It has become less about the techniques of bookmaking and more about sharing the joy of quiet moments of simple creation.

The 1970s was the beginning of my life as an adult—a time of discovery and exploration which brought both joy and struggle. In this second decade of the twenty-first century and seventh decade of my life, I am trying to continue the exploration, make it more about the joy than the struggle, and share that joy with as many people as I can.

image from a birthday card I made in the early 1970s
Susan Kapuscinski Gaylord at Monday, April 02, 2012